ASAHIYAKI is located in the Uji region of Kyoto Prefecture which is known as the center of tea culture, Just across the Uji River from the  Byodo-in Temple, also perched at the foot of Mount Asahi.

Its earliest working-kiln was constructed about four hundred years ago, on the cusp of the shift from the Momoyama (c. 1585-1605) to the Edo Period (c. 1605-1867), by the first-generation kiln-master, Tosaku I.During this era, the supremely-influential Tea-master Sen-no-Rikyu (1522-91) brought to perfection the  tea ceremony , and his later successor-but-one to that position, Kobori Enshu (1579-1647), began to make his first youthful but noted appearances in Tea-circles.  he established an enduring relation with the increasingly-productive Tea-growers of the Uji area, and contributed significantly to establishing the Uji tea as the nation’s first choice for green tea.  Enshu was who officially bestowed on Tosaku the kiln-soubriquet ‘Asahi’.  And this is why Asahikaki has traditionally been numbered among the ‘seven Enshu kilns’ [Enshu nanagama].

In the early decades of the Edo Period, as a bomb in the consumption of Uji tea and widespread popularization of  ‘Tea-ceremony’,  Asahiyaki began to achieve artistic and commercial success. Thanks to the activities of the first three generations of Asahi kiln-masters (Tosaku I-III),  Tea-practitioners of all social ranks competed to acquire and possess essential utensils – such as tea-bowls and lidded cold-water-vessels .

By a shift of Japan’s cultural hub from the Kyoto to Edo (present-day Tokyo) , the lifetimes of the fourth-to-seventh generation kiln-masters became a period of unrelieved economic hardship for them and their households.  During this time, The generation kept conneecting by making common roof-tiles, and even offering a ferry-service across the Uji River.

During the era of the eighth-generation kiln-master, Chobei VIII, there occurred an armed domestic conflict The Hamaguri-place-gate Disturbance. One result was that part of the Kyoto royal palace became razed by fire. Through the good relationship with the countnoble Niwata house, the Asahiyaki commissioned to provide the new roof tiles a by the rebuilding and refurnishing thereby necessitated.

According to growing general interest in consumption of recently-developed  Sencha.  Chobe extended Asahiyaki to include what were the ur-forms of the smaller and more delicate porcelain utensils to  enjoy fine green leaf-tea.  The popularity of these utensils was to attain its zenith during the era of the ninth kiln-master,  Chobe IX.

Meiji era(1868-1912),which is Japan's confused period, the disappearance of their former native markets forced many ceramic-producers out of business.  The twelfth-generation kiln-master, Shosai (d. 1932), faced great difficulties in maintaining the family enterprise.  The publicity attending upon a chance official visit, however, by the then-Crown Prince (later to become the Taisho monarch), resulted in a timely revival of patronage for the ASAHIYAKI.

In 1922, Shosai’s second san Tsurunosuke voyaged to Great Britain.    In 1923, As Hamada Shoji (1894-1978) hurried back to Japan to help with the aftermath of the Great Kanto Earthquake,   Tsurunosuke stepped into his shoes by building, at Bernard Leach’s(1887-1979) behest, Britain’s first sloping,  kiln [noborigama] in St.Ives.

Probably as a result of Tsurunosuke’s early death, at the age of just thirty eight, in Japan, it is little known that, at Britain’s great Victoria and Albert Museum of Arts & Crafts, there are still preserved works from the hands of not only first-generation kiln-master Tosaku, but also Tsurunosuké himself.

Despite a sharp reduction in demand for traditional ceramics imposed by the period of national privation surrounding World War II, the family has managed to keep its kiln-fires burning well into the era of the present, sixteenth-generation kiln-master, Hosai XVI.

ASAHIYAKI has been taking great importance to imprinting the underside of each of its productions, just once, with a small metal seal graven with the characters for ‘asahi’ [朝日], the soubriquet held  to have been granted to the first-generation kiln-master by Kobori Enshu – and most unusually for an era in which almost no other kiln yet marked its products in an equivalent manner.  Family tradition also has it that the seal used by Tosaku II (d. 1670) reproduces the brush-calligraphy of Enshu’s third son,  Gonjuro (1625-1694).  The utensils made by Tosaku II is famous for  ‘Taku-ASAHI’. The seal now utilized by Hosai XVI is that previously employed by Hosai XV, use of which was graciously approved by Her Highness Princess Takamado.

The Asahiyaki kiln still carefully maintains its dual tradition of creating both ware for the Rite of Tea, as first undertaken by Tosaku I, and also utensils with which to savor infusions from fine green leaf-tea (sencha). 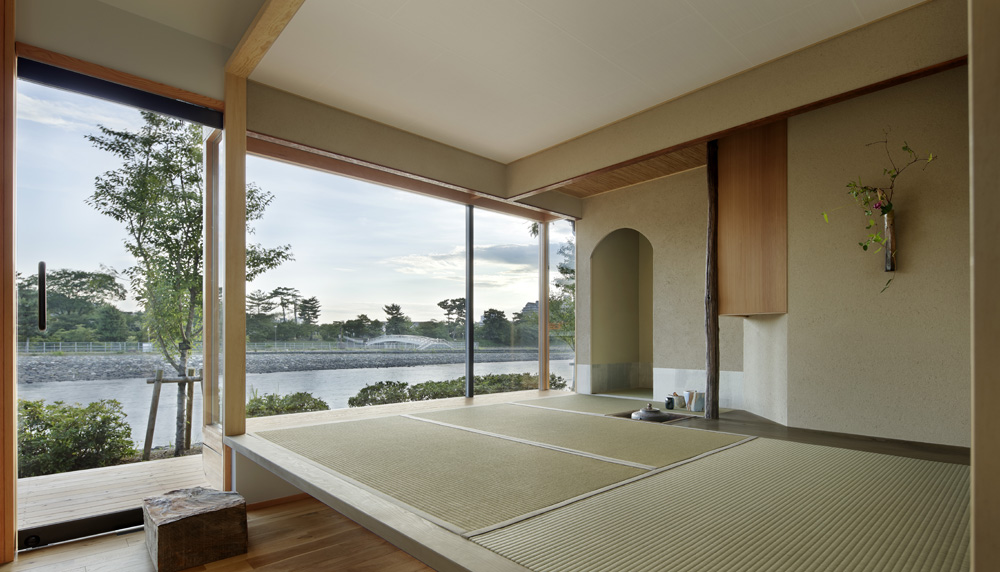