At present, these are the gas-fueled kiln, and the sloping, multi-chambered kiln (noborigama) .  Since each produces different characteristics during firing, the effects of firing that are desired determines choice of kiln-type.

The advantage of employing a gas-fueled kiln lies in the ease and precision with which temperature-control can be managed.  Consequently, it is the type preferred whenever a very particular degree of heat is essential to both bringing out subtle hues in a given glaze. and large quantities of ware that should be needed for absolute uniformity of glaze-tint.  This type of kiln is suited to produce utensils for intended for infuseing leaf-tea ,those which basically formed from a high-vitreous clay-compound perfected by the eighth -generation kiln-master.
ASAHIYAKI favour a delicacy of both shaping and tincture by firing gas-fueled kiln. 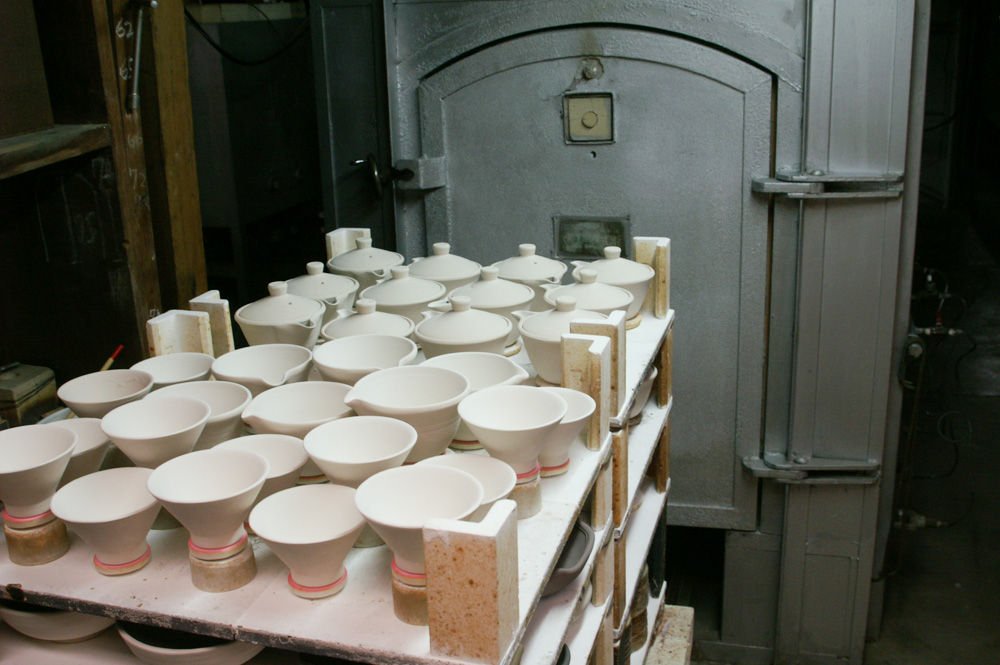 By contrast, whenever utensils required for the Rite of Tea it has long been fired by the sloping, multi-chambered kiln.  The kiln presently employed for this purpose was designed and constructed by the fourteenth-generation kiln-master, Hosai (d. 1947). Upon this structure Her Highness Princess Mikasa graciously bestowed the kiln-soubriquet ‘Genyo’ (‘Splendid [and also Profound] Kiln’).

Although it had been the custom for the kiln-master of each generation to build but a single new sloping kiln [ichidai hitokama], Hosai had consecutively constructed no fewer than four other such edifices.  And, through this process , he eventually succeeded in creating a sloping kiln , Genyo, that successfully amalgamated all that he had by then discovered.

Nothing contrasts more starkly with the gas-fueled kiln than extreme difficulty of achieving heat-control that this kiln-type and its pine-fuel impose.  The behavior of both clay and glazes is influenced extensively by not only subtle fluctuations in firing-temperature, but also direct contact with flame.  As a result, a given firing may on one hand produce a certain number of utensils distinguished by glazes of breathtaking beauty.  At the same time, a more-or-less sizeable majority of the articles eventually extracted from such a kiln can turn out to be failures.  Nevertheless, the unbroken use of the clay endemic to the Uji basin, of red-pine fuel, and of the sloping kiln – all of which date back to the endeavours of the very first-generation kiln-master, Tosaku I – constitutes a tradition that we of the Asahiyaki take very seriously indeed.