4th anniversary project ”Learning about ASAHIYAKI” - The climbing kiln in Uji.
Thanks to all the support, the 5th year of Asahiyaki shop & gallery started in August, in spite of the disaster of covid-19.  Since the opening of the gallery, I have been explaining about the climbing kiln and the expression of the pottery to many customers who have visited the gallery, in listing to my talk very carefully.

Thankfully, we have often received comments, "I want to know more about Asahiyaki. I would like to see the studio and the climbing kiln if I have a chance.

Learn about Asahiyaki, a project started by the owner of the shop.

First, the owner went to Otsu to prepare the sweets.

Explaining the hospitality of local pottery, we prepared the cool sweets named "Ujigawa" ,which is made of red bean paste using natural materials prepared by producer. 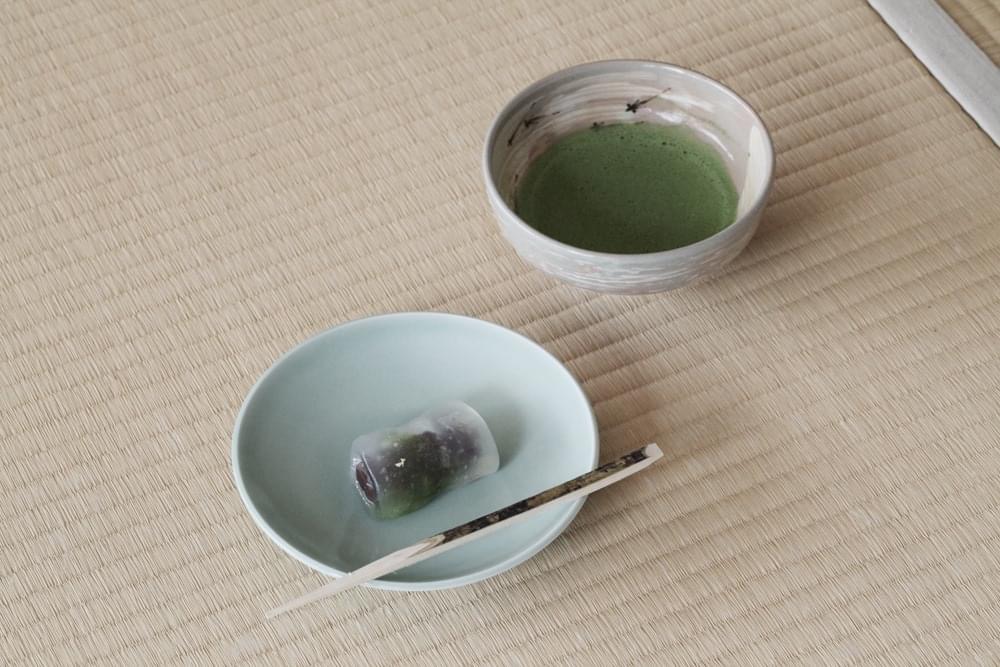 Greeting the participants, thanks to the power of tea, the program n peacefully started. 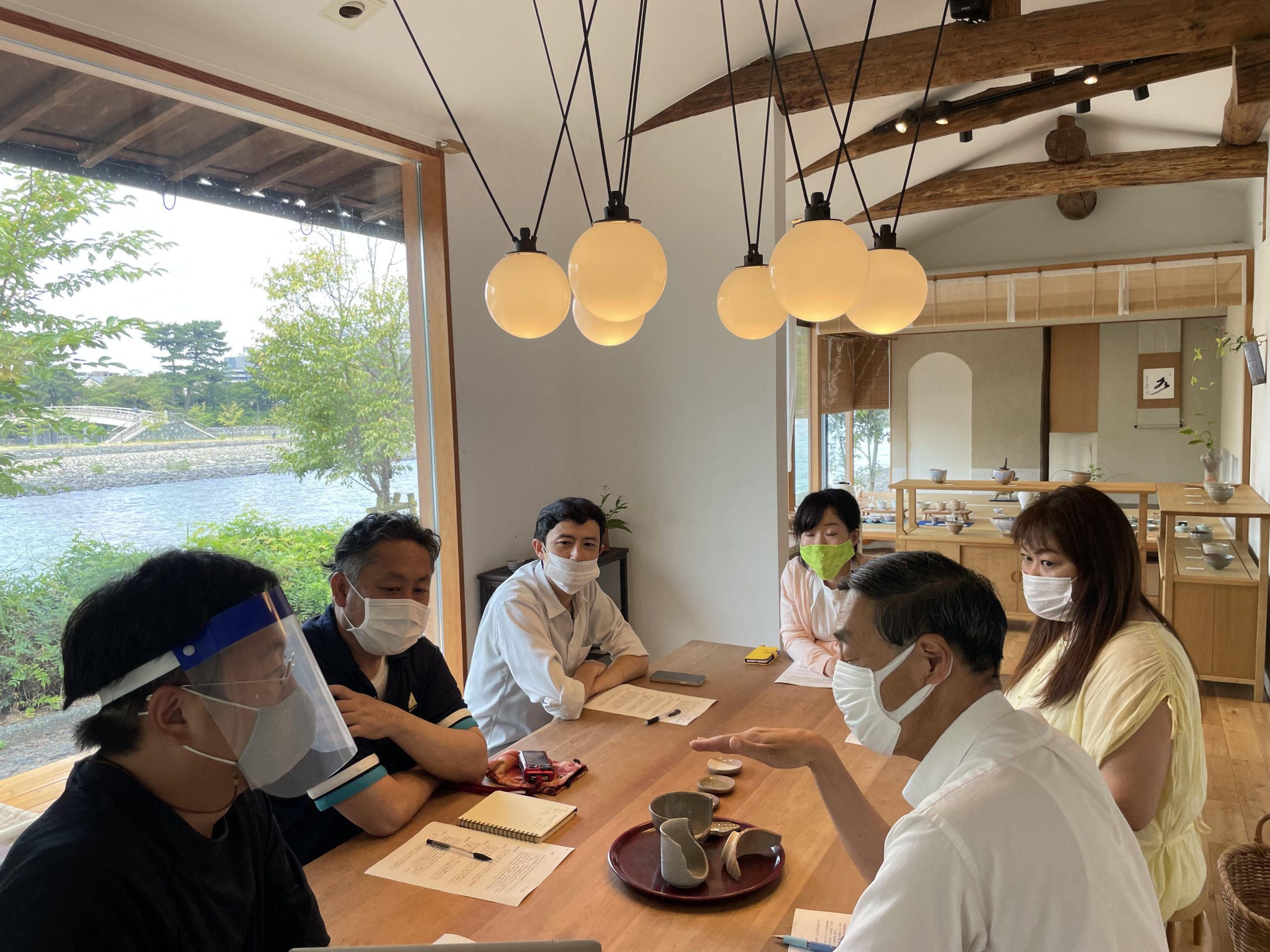 The first session: "Understanding the climbing kiln in Uji".

I accompanied the participants and it became a time to learn about the climbing kiln "Genyo", even the areas I also don't have a chance to see.

Have you ever seen a "climbing kiln" anywhere? I had only seen the inactive anagama and climbing kiln in the memorial hall.  When I stood in front of the firing port of the climbing kiln, Genyo, for the first time, I remember being impressed with its huge scale. 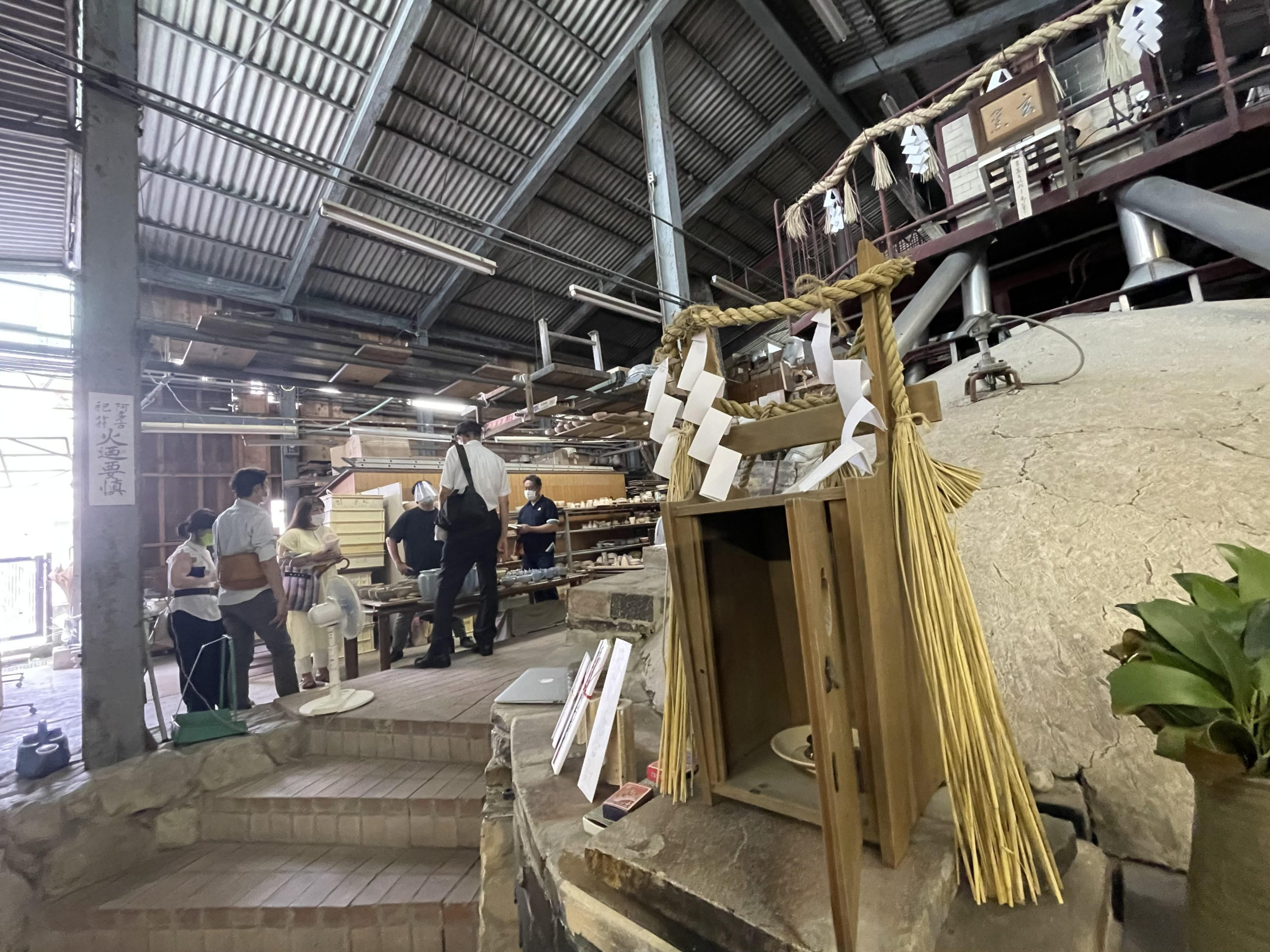 Beside the kiln, there is still a split piece of wood from a red pine tree that had been burned for three days to raise the temperature, reminding us that Asahiyaki wares are the result of the clay of Uji and the flames from the pine wood.Making the fire dance in the kiln.

I have learned that it is up to the gods of the kiln and the fire to create an expression on the wares that are beyond the experience of the craftsmen, scientific factors and human hands.

The chimney of the Gen Kiln, which was originally built by Asahiyaki, had been smokeless for more than 50 years to prevent smoke from rising. Other innovations can be seen everywhere, such as the shelf structure that can be raised and lowered so that many pieces can be fired, and the mechanism inside the anagama.

We had two groups of visitors, one in the morning and the other in the afternoon, and each time they were very impressed. 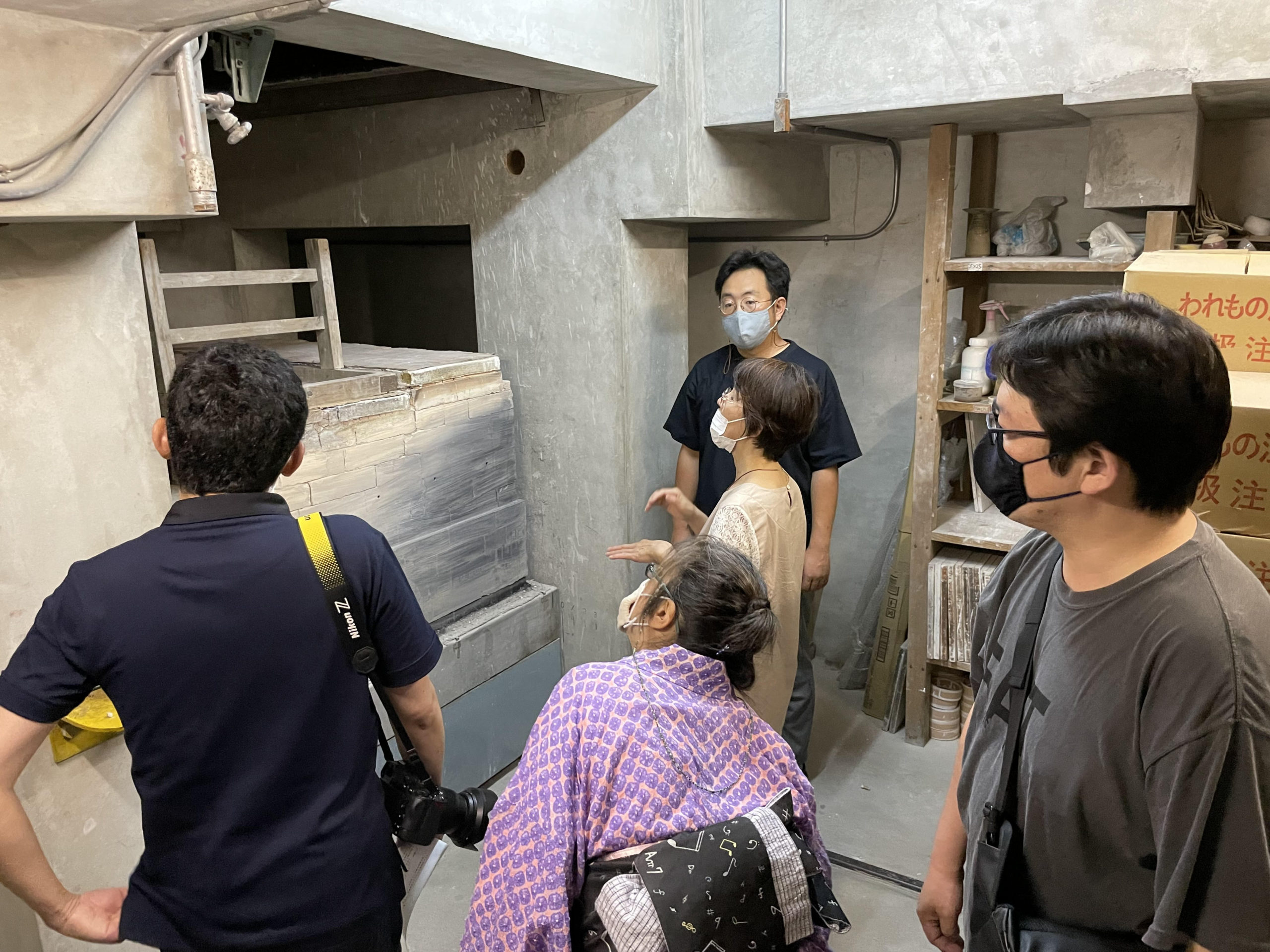 How is Asahiyaki pottery produced using local clay and fired in a kiln?  How does it change its expression? By visiting the climbing kiln, I think the participants were able to learn about the technical details and compare various works to get a feel for the background of Asahiyaki pottery. 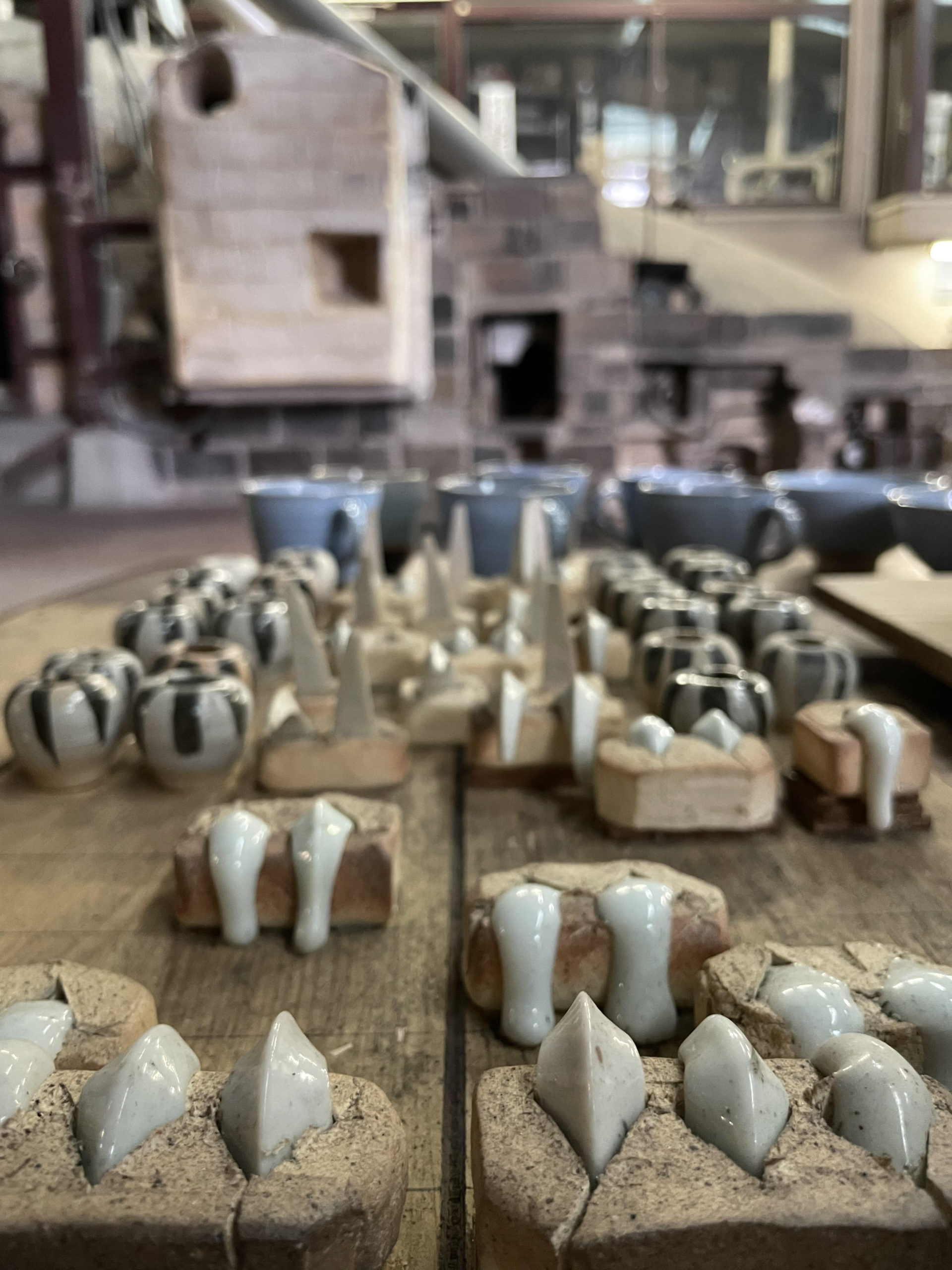 If the "climbing kiln" is the stage for the pottery, the "studio" is the backstage of Asahiyaki, where the pottery is formed before being put into the kiln. 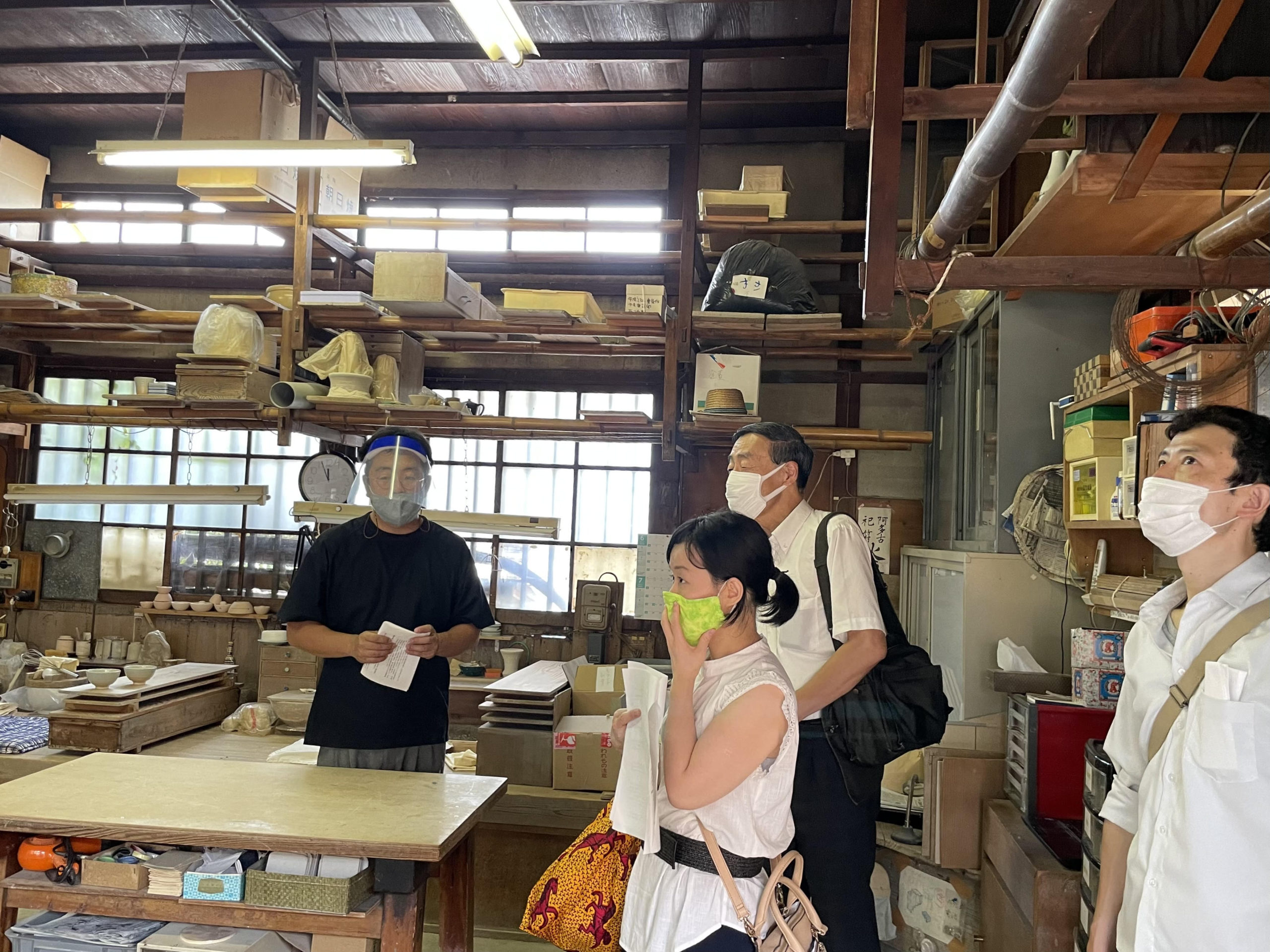 You can see the traces of scraped clay at the foot of the potter's wheel and the eggs of the works lined up on the wooden board before firing.

The studio is a compilation of the wisdom of the craftsmen, with tools we rarely see, there is no end to the interest. I hope they were able to feel the texture that can only be created by human hands. The studio was closed on that day, but next time I would like to visit on the working day and talk to the factory manager about what goes on behind the scenes.

The participants were filled with intellectual curiosity when they saw the climbing kiln and studio for the first time.

After returning to the gallery to take a fresh look at the works, they shared their impressions of the event and concluded with a warm welcome to the owner, who had spent a long time showing the "Secrets of Asahiyaki" in a semi-outdoor event without air conditioning on a very hot day. 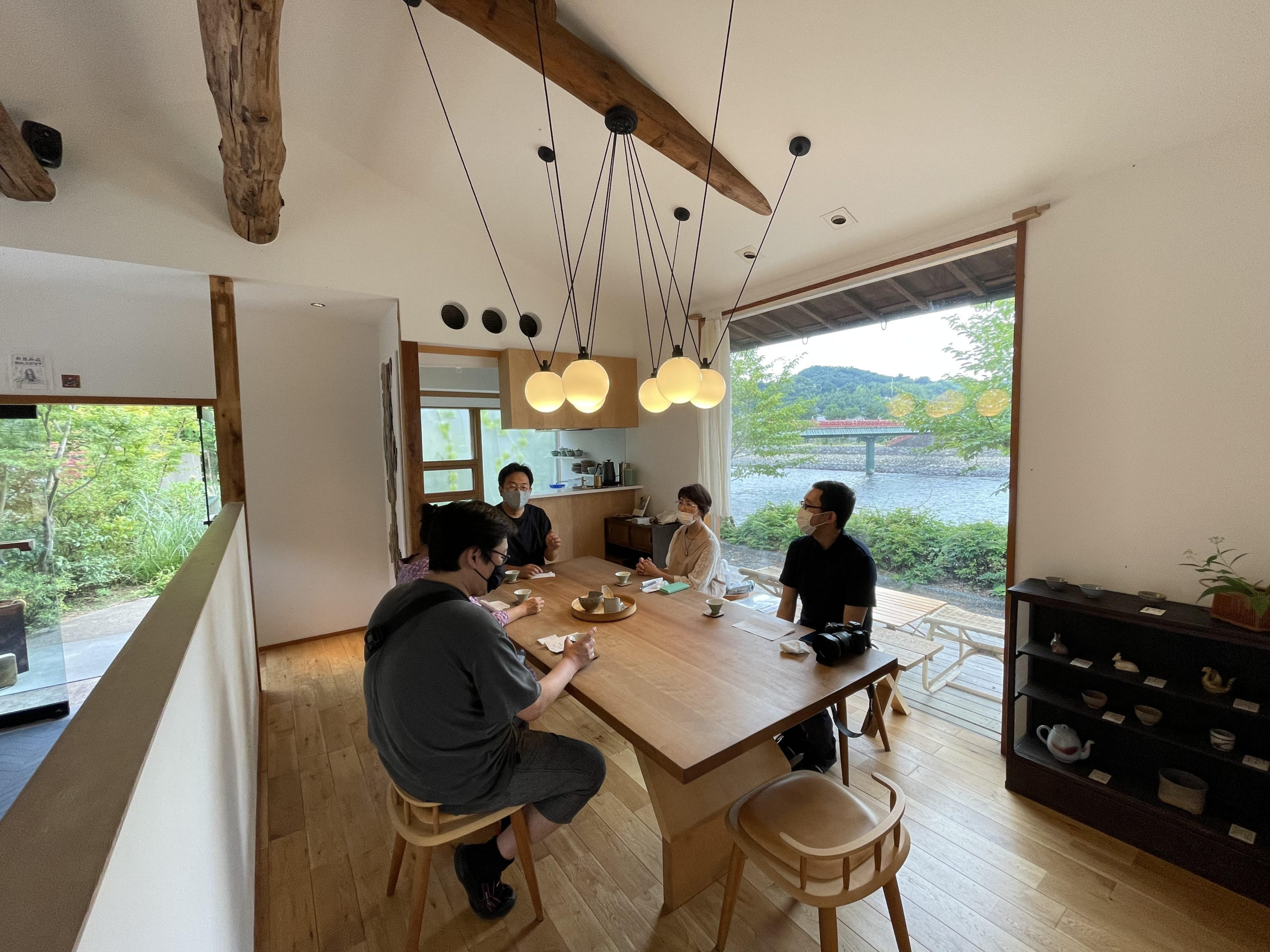 This project will be held continuously. Please join us next time and learn more about Asahiyaki.

Staff in charge of Learning about ASAHIYAKI
Fujino